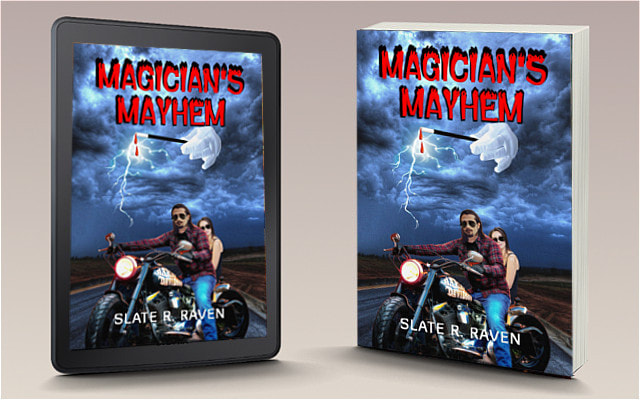 ​Something Wicked this way comes!
​
And it’s nothing that three friends would ever dream of having to encounter while enjoying a simple reunion at the lake one weekend.

Sherry
5.0 out of 5 stars Fantastic thrill ride! You must read this book.
Reviewed in the United States on October 30, 2019
Verified Purchase
From the first chapter I was drawn into the book. Every time I needed to do something else, I ran late... because putting the book down was so difficult! The intricate weave created by the author is breathtaking. It brought danger, excitement, suspense, and some shocking twists and turns that left my mind seeking more! I’ll definitely be watching for further work by Slate Raven. If you enjoy reading, this is a must have for your collection


Regina W.
5.0 out of 5 stars Excellent book!! A definite must read!!!
Reviewed in the United States on January 2, 2020
Verified Purchase
Magician’s Mayhem is one of my new favorite books I’ve read. It was filled with edge of your seat suspense. Thriller doesn’t do this portion of the novel justice. As for the Paranormal elements, they come across with such subtlety you already believe before you realize there could be room for doubt.

The characters were so well constructed that you were inside their minds feeling their fear as threats arose, their relief as they live to fight until their last breath. Yes I even was saddened by the loss of members that had become like good friends. This was a masterpiece of well worded mazes that when you turned one corner your jaw fell to the floor.

By the time your face was in place once more the author surprises you again. I may read it again just to make sure I didn’t miss anything as he builds everything in layers so you aren’t pummeled with information and backstory. I’ve read many skilled authors this one is going to rank right up there shoulder to shoulder with them. Although his irreverent and irrepressible attitude may just make him shine where the others sought to fit in.
To me this is a must read!


Ksenia S.
5.0 out of 5 stars This was an excellent read!
Reviewed in the United States on December 23, 2019
Verified Purchase
I liked this imaginative, detailed, and delicious supernatural novel. From the very beginning, I sensed a bright thought behind the horror of the plot, which could be best described with the beautiful words from the Bible: “Be strong and courageous. Do not be afraid; do not be discouraged, for the Lord your God will be with you wherever you go.” —Joshua 1:9
“Magician of Mayhem” is an excellent artistic attempt to show that we need to keep the faith and determination to fight the evil. We shouldn't allow anyone to break our spirit.


NickleD
4.0 out of 5 stars Didn't see that coming!
Reviewed in the United States on December 10, 2019
Verified Purchase
This book was wonderful! I enjoyed Jessica and Bane and the relationship between them so much! I was definitely surprised by the ending and there was a twist I was not expecting! So that was really cool. I would definitely read more by this author and you should too!


Veronica Lee
5.0 out of 5 stars Hard to Put Down!!
Reviewed in the United States on October 28, 2019
Verified Purchase

I'll skip a narative of this book, as it has already been eloquently and accurately done in the description. Instead, I want to focus on what make this particular author worth reading.

With his excellent writing skills, Slate Raven draws the reader in; each word, beckoning one to follow him to the books completion.

His characterization is a formidable part of his style. Describing feeling, emotion and temperament is one of his best qualities as a writer. Describing the character themselves, equally so, without being over done.

A showman of words, his vocabulary and use of the English language to sew sentences together is suburbly done.

I could consider Slate to be a "book chef" in the sense that what he dishes up is definitely worth taking in. First, the appetizer, then the main course and saucy sides. Finally, the delivery of the dessert that leaves one wondering how he did it and if there's even more! Mouth watering throughout the entire "paper and ink" meal. Very few authors can do this on the level, or in the way in which he has done it.

This was a hard book to put down and I strongly encourage Magician's Mayhem as your next read. It will be one you will be drawn to go back to!

I Wait his next book with anticipatuon!

Cyanide Myst
5.0 out of 5 stars Love Bane Bloodworth... Love Slate Raven!
Reviewed in the United States on December 11, 2019
I loved following Bane Bloodworth into the next book! I loved Magician's Mayhem with its twist and turns. I've been in love with Bane for many years as I've followed his story for near 20 years. Love the story of Jessica and Bane. I can not wait for the next story from author Slate Raven! Love his books! I've been hooked since his first!

spiritof6
5.0 out of 5 stars Excellent read.
Reviewed in the United States on November 7, 2019An interesting tale that combines wit and great, compelling, story telling. It's good to see a writer that knows how to play on the strengths and weaknesses of women and men. Great read.

I received a copy of this book via voracious readers in exchange for frank review. A supernatural serial killer is on the loose pursued by Blane Bloodworth after the killer takes out his family. A book that kept me gripped from the start so I did not want to put it down. Brilliantly written with plenty of action, twist and turns and a surprise at the end, what more could a reader ask for? A tad gory at times but a great book none the less. All that spoiled it for me was the totally unnecessary sex scene between Jess and Thunder which added absolutely nothing to the book.

Heinous murders executed by a cold-blooded serial killer mark the headlines of news across the US in Magician’s Mayhem by Slate R. Raven. This incredible novel is an original thrilling read filled with surprises, revelations and nail-biting edgy scenes.

Despite hours spent studying photos of crime scenes, Federal Agent Pamela Phillips remains perplexed by the serial killer’s ability. Without a pattern to follow, the criminal continues to hit different houses in different states at random. Meanwhile, best friends Bane and Jessica follow the news with horror. Like everyone else, Bane Bloodworth is sickened by the brutal attacks. An intelligent individual with spectacular skills in martial arts and other forms of fighting, Bane is fearless. Jessica, his wife Carrie, and others close to him view him as a protector. When the serial killer goes after members of Bane’s family, Bane follows his trail eager for revenge. The killer, however, seems always one step ahead of Bane and when they finally meet, Bane is dazed by what he finds out.

Slate R. Raven creates a powerful, psychotic antagonist in Magician’s Mayhem. The serial killer targets the most innocent and destroys anyone who dares to try and stop him. In addition, he possesses unearthly powers that shock even Bane. The characters are intriguing, interesting and well-developed. Though on the surface they appear as rivals, Bane and Jessica share a loving relationship that goes back to their high school days. Jessica is loyal while Bane is protective and skillful. Despite his tough exterior, he is kind-hearted. The action scenes in the book are unpredictable and thrilling. Deaths occur and the protagonists have to fight the killer with everything they have. The novel’s end is also surprising. It contains revelations and culminates into a powerful, absorbing scene.

Magician’s Mayhem by Slate R. Raven is a fast-paced thriller based on a puzzling mystery and which contains strong, determined characters, incredibly impressive narration and original plot.