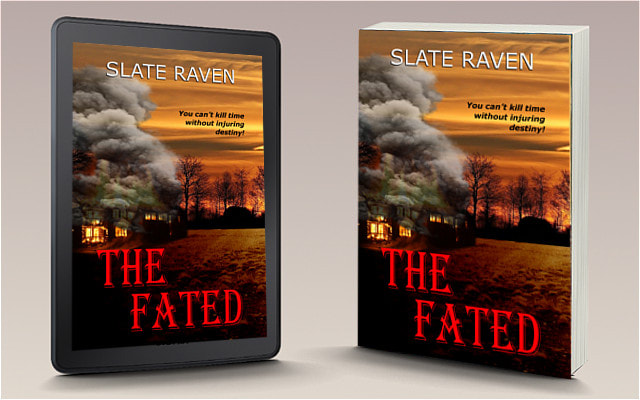 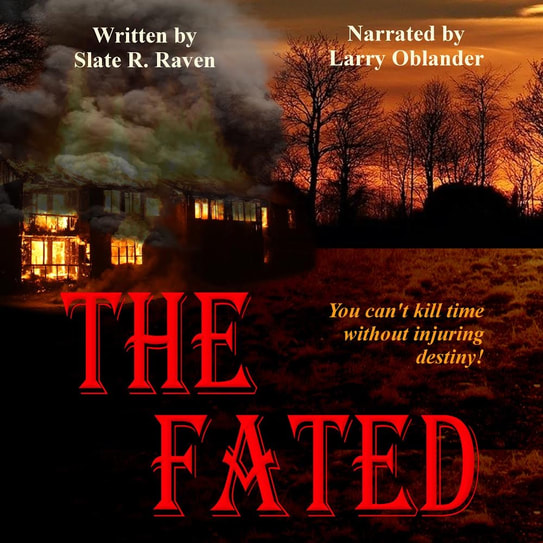 Audible
On Amazon
Several people’s lives are cosmically interwoven by a violent game. It brings destruction and death to anyone who crosses its path. No one is safe.  Where does destiny end and when does fate take over?

Jonas had been on the run since he was thirteen. A group pursued him, but he didn’t know why. Yet, he knew that if they’d ever find him, he will die. He lived a solitary life to survive until his dreams began. Each dream revealed a new piece of an ever-widening puzzle. A mystery woman haunted his slumber, drawing him closer to the destiny he knew and feared.

Tammy's life was drastically altered by an encounter in a dark alley. She had seen what no one else in the world had lived to tell about. When it was time to act, she had faltered and feared for her life. Could she tell the world what she had witnessed, and would anyone believe her? How could she live with the knowledge that made her life a living hell?

Stacey had won the lottery, and everyone wanted a piece of it. The only person she felt she could trust was her best friend, Tammy. However, Tammy began having serious problems after the terrible night in the alley. Stacey had decided to hire a bodyguard to protect them. But, before long, she developed romantic feelings for their protector, which distracted them from their main concern... keeping Tammy safe.

What will become of these people whose lives are intertwined by destiny and fate into a fierce game? With lives on the line, and devastation on the horizon is anything or anyone safe? It’s only where destiny lands that you can find The Fated.
​

Ksenia
5.0 out of 5 stars Delicious thriller!
Reviewed in the United States on November 12, 2020
Verified Purchase
In the book, I found a breathtaking story about the fight against evil that leads gradually to the ultimate destruction of the world. Is the apocalypse inevitable? Is evil capable of mercy, love, and self-sacrifice?

Once again, the author made me happy with a very well thought out plot and original characters. Even a friend of the protagonist was such a lovely surprise.

“After all, society is the cause of most people’s fears and traumas.” Slate R. Raven, The Fated.

Read the story to challenge your heart and mind and get thoughts to savor, because often we stick the evil labels to kind faces and take deception for truth.


Liane Carmen
5.0 out of 5 stars Paranormal roller coaster ride!
Reviewed in the United States on January 19, 2021
Verified Purchase
The Fated weaves an intriguing tale of three people battling to survive in a world where danger lurks. Jonas has been running, pursued and hunted for years. He doesn’t know why but is certain if he’s caught, he’s a dead man. He finds himself with new and unexpected powers but when his world and reality collide in a dark alley with Tammy, a grade-school teacher, he becomes obsessed with her. After what Tammy has seen Jonas do, she’s now terrified and convinced no one would believe her. She confides in her best friend Stacy and what begins is a twisted path for all three where they question perception vs truth, angels vs. demons. They learn not to trust anyone or anything at face value.

The Fated is not necessarily the type of book I normally read, but Slate Raven’s descriptive storytelling sucks you in and sweeps you along. He paints his characters with such vivid color, you can almost see them in front of you as you join them in the world the author has created. The author did a great job bringing the story and characters to life, letting every unexpected twist and turn stun you as he propels you forward toward the climactic ending where a choice must be made. Is it fate?


Cyanide Myst
5.0 out of 5 stars Twisted and action packed book
Reviewed in the United States on December 29, 2020
Verified Purchase
I started reading Slate Raven books in 2000, starting with Civilized War 2023. It caught my attention with its detailed descriptions of the scenes as they unfold in the story. I happen to love that he is a great longiloquist, a true picture painter of the mind. The character in his books I became most intrigued by is his character Bane Bloodsworth. It is because of this beloved character in stand alone series of 5 or 6 books that I found it hard to dive into a new book without Bane in it. I finally took the leap of faith as author Slate Raven has never failed me before and wow, wow, wow! I’m so glad I did! What a wonderfully twisted and action packed book. Even when I had to put it down my mind wandered back to this story-line and I constantly wanted to know what was happening next to the characters Jonas, Tammy and Stacey… this ride on the fine line between Heaven and Hell is sure to keep the reader wondering what lies around the next turn in this book.


amgrassi
3.0 out of 5 stars Hits the ground running!
Reviewed in the United States on July 29, 2021
Verified Purchase
The Fated by Slate R. Raven is a story that takes off running from the very first page and doesn't stop for a breath until the very last page!

Jonas has been on the run for most of his life but he doesn't know why, but he does know that if he is caught he is as good as dead. Over the course of the story Jonas grows powers and he is trying to figure out why and how to use them. He also has a reoccurring dream that eventually leads him to the final battle, if you will. Along the way Tracey witnesses one of Jonas battles and is certainly scarred but won't go to the police because she is sure they will find her crazy. Tracey and Jonas cross paths again where Jonas has to make the ultimate decision.

Overall, this was a very interesting book that was quick and easy to read because it sucks you in immediately. It also leaves you with several questions, like is there a heaven or hell? Good or bad? Truth or lies? And it is all tied together quite nicely in the end. Mr. Raven certainly has a way with words.

Thrifty LoCo
5.0 out of 5 stars Plenty of action, but so much more
Reviewed in the United States on September 1, 2021
Verified Purchase
This is a different sort of book for me, but I'm SO glad I read it! It follows Jonas (and also Stacey and Tammy) as they try to navigate a dark, difficult, and dangerous world. But this is so much more than a standard adventure/survival story. Each character (especially Jonas) is written with a great deal of care and detail. I felt like I really got to know each of them, and understand their natures and motivations.

The action was basically non-stop! Something important and exciting was always happening, and I enjoyed going along for the ride. As a reader, I liked all the action, but at the same time I was trying to evaluate what I'd read, and figure out what was actually going on under the surface. Let's just say....there's a lot more to this story the deeper you look!

Enough description was provided by the author that I was able to visualize the various scenes, but it never got to the point that it took away from the action. The perfect mix of character, scene, action, and deeper meaning. Definitely 5 stars!


Merry a Vero Beach, FL Reviewer
5.0 out of 5 stars A paranormal thriller that you just can't put down once you begin!
Reviewed in the United States on August 2, 2021
Verified Purchase
Wow! Once you begin you are grabbed and never let go! With so many twists and turns, this book is a page turner as you try to figure out what will happen next. You can't. The hero of this book is Jonas who for most of his life he has been running and hiding dodging those who are after him. He knows if he stops running, he will be killed. But why? He doesn't know. As the story goes, Jonas begins coming into powers and he has to learn how to harness them and use them. He also runs into Tammy, a teacher who witnesses Jonas' use of his powers and being afraid to say anything, she confides in her best friend Stacy. When Jonas has a dream of the biggest battle of all that could end the civilization as he knows it - is it the Apocalypse? Is it all as it seems? Is it real? What is good? What is evil? With so many shocking twists to this tale you just can't put it down until the end! If you like paranormal thrillers this is the book for you! I received and ARC of this book but the opinions expressed here are strictly my own.


Kindle Customer
5.0 out of 5 stars This riveting story-line makes this book difficult to put down! Add this to your collection!
Reviewed in the United States on December 31, 2020
Verified Purchase
Deception or truth? Awe, the age-old struggle of Heaven and Hell and everything in between. The question we all ask ourselves. Good or bad? Evil or virtuous? Slate Raven weaves a winding road of surprises and unknown realities for Jonas, Tammy, and Stacey. What's next? The constant unknown is what makes it difficult to put this book down. Slate's artistry of piquing and re-piquing the reader's interest is amazing. An unpredictable story-line along with one of the best story-telling talents makes this an intriguing read. And talk about painting a picture? Slate's a pro!
"Though the cracks, craters, and cavities permitted an ample amount of amber light to enter the attic, the shadows fought back valiantly."
And what about this? "Cobwebs hung like drapes between the roof's support beams, flailing frantically against the wind's aggressive currents." I love it!
And as soon as you get comfortable...chaos ensues. While I thoroughly enjoyed Magician's Mayhem, this read was equally captivating. I look forward to reading Slate's next creation.


Kara Marks
4.0 out of 5 stars Very intriguing and well-written
Reviewed in the United States on July 29, 2021
Verified Purchase
This is quite a different book for me. It is very well-written technically, but I was rather confused at first. I’m glad I kept reading, because the story really pulled me in. It made me uncomfortable at times not to understand where the story was going, but there was enough action that it was hard to put down. I can recommend this book to anyone who likes thrillers or the paranormal; I was provided a copy of this book, but these opinions are my own.


Ferocious Reader
4.0 out of 5 stars Action packed adventure
Reviewed in the United States on September 30, 2020
Verified Purchase
A unique novella that delves into the lines blurred between heaven and hell, demon and angel. This story is action-packed and stuffed with suspense. A winding adventure to the very end. Along the ride are several vibrant characters who each spice up the tale with their personalities. Will be reading more from this author.


Amazon Customer
5.0 out of 5 stars I was on the edge of my seat!
Reviewed in the United States on October 28, 2020
Verified Purchase
This remarkable work of fiction is an inventive exhilarating read filled with bombshells, revelations and edge-of-your-seat tense events.